There's a lot that went into completely rebranding my design firm January Creative LLC. I take you behind the scenes and show you the planning process it took for the rebrand. 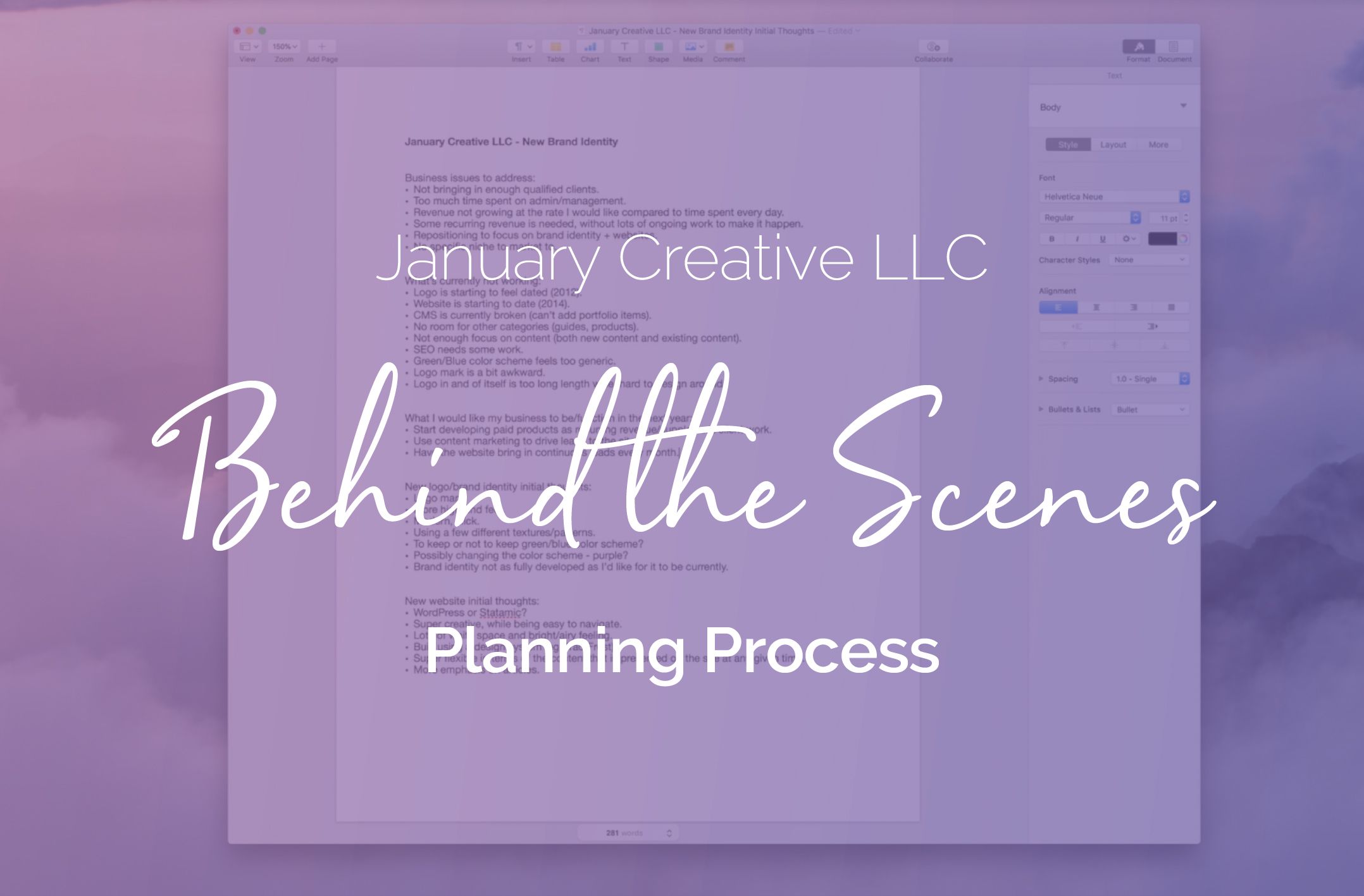 Who doesn't love to see how people get things done and get to peek behind the curtain at how it all happened? That's exactly what I'm going to do in this article (and video!).

I'm going to take you behind the scenes of the planning process that it took to rebrand my design firm January Creative LLC, what all was involved, and how I did it. To take it one step further, I even recorded my entire planning process and created a time-lapse video so you can see every step (if you want to see that, it's at the end of this article)!

Planning out all the details

In order to successfully complete a massive undertaking such as rebranding my design firm, there was so much that needed to be thought out and planned ahead of time to make sure all the pieces fit together and nothing was left out.

That's where the planning process started. In order to get started, I took some time to write down all of my thoughts on the screen. I considered this a braindump just to get anything and everything out of my head and into something a bit more organized and concrete.

During the braindump phase, I just started writing in a blank Pages document anything that came to mind. As I went, I tried to keep it somewhat organized. The organization wasn't the point initially, because I knew this would be a bit of a messy process to start. It was more important just to get all of my thoughts out as they came to me. I could organize them as I went or organize them later in ways that made more sense the more thoughts I started to write down.

I feel like any time you are working on a large scale project, taking the time to get all of your initial thoughts out on paper/screen is crucial.

It's an important time to do this because you really haven't started your project yet, so really any idea you have hasn't (and shouldn't have) been through the vetting/filtering process and is still a possibility.

This is what I did in my initial braindump. Nothing was off limits and everything got written down, no matter how weak the idea may be or if it would even work. I didn't want to discount ideas and thoughts in this step or take the time to think if each one was viable enough to continue. I knew I would have time later to filter through and see which ideas still had merit later.

If you're undergoing a massive project, I highly recommend you do the same. Write everything down and don't allow yourself to filter anything out before you've had a chance to write it down.

Once I spent a considerable amount of time on the braindump, organizing it, and making sure there was nothing else left to write down, I then started pulling out items that would need to be done. These items would make it onto my task list of things to do for the rebranding process.

The tool I used to help manage this task list is one I absolutely love called Airtable (affiliate link). Airtable is a combination between a spreadsheet and a database that lets you completely customize how you want to organize your content. It was a dream to work with for creating my initial task list (and for my launch calendar later on in the project). You can see my task list Airtable as it currently stands here:

These types of items included the obvious ones like the logo design and website, but also the not so obvious ones like this very article you're reading right now and the video you see down below. In my Airtable, I added fields to include the current status (i.e. "Not Started," "Half Way," "Complete," etc.) and exactly what I wanted to screen record to share in videos.

Just like any other large-scale project, the task list and things that need to be done are going to change and evolve over time.

In the time-lapse video you see below, you'll see me write the initial task list, but since the recording, that list has nearly doubled in size.

So while I took the time to do the initial task list, lots and lots of additions, changes, and revisions have taken place as the project progressed over the three months it took to get everything done. Tasks were added as new ideas surfaced, tasks were removed or combined as ideas changed, some tasks were broken down into smaller tasks to make it easier to manage, etc.

Close to the end of the project, I found myself adding tiny tasks to the list, things like "make favicon," "upgrade to PHP 7.1," and other things to not forget as things started getting closer to my launch date.

I can't stress enough how important it was for me to have this task list. With nearly 100 tasks that had to get done, with some taking dozens of hours to do while others taking only a few minutes to do, it was important to make sure I had it all in one place and constantly updated so nothing would be forgotten about or left incomplete.

Time-lapse video of the planning process

It's one thing for me to tell you all about what I did to plan out the rebranding process, but it's quite another for you to get to see it! I screen-recorded my entire planning process, everything from the initial braindump to organizing the tasks.

Let me take you behind the scenes and show you the time-lapsed version of the planning process that it took to rebrand my design firm January Creative LLC. The video below has an introduction followed by the time-lapse. Feel free to speed it up or slow it down using the function in the bottom right-hand corner to make the time-lapse faster or slower depending on what you want to see.

Tomorrow, I'll continue this behind the scenes party with showing you the color + typography exploration and logo design process for January Creative LLC, including where I screen-recorded that process as well!